As we know the first half can be crucial. A wise commentator once told me; “In a game where winning is about making money, making money in the first half sets you up nicely for a winning year. Although the lads should not sit back at this point, that would be a mistake”. Genius.

Here below are the half year returns to the end of June on our various portfolios plus the relevant benchmarks for comparison. 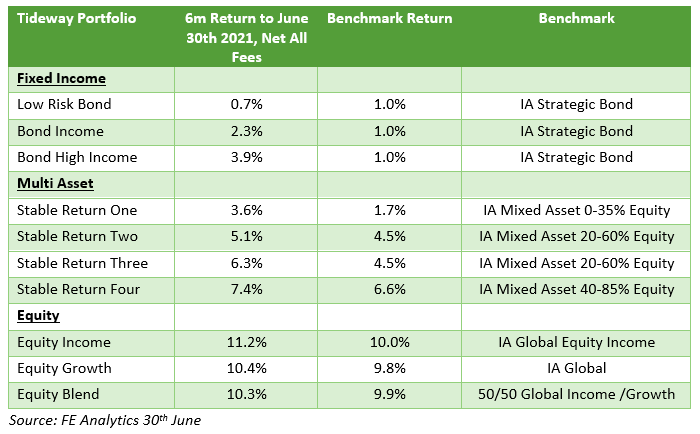 I spoke to the ‘Manager’ this week, who has earned his bacon yet again, to get a sense of the performance of the various players and the way the game has gone in that crucial first half.  He has produced a more detailed write up which will be in your quarterly performance reports to be published in our client portal later this month but here is a sneak preview.

Firstly, the conditions. The pitch was pretty smooth, a nice playing surface for our lads, no big bumps or troughs, nothing much left field, no streakers or pitch invasions, a good period for them to show off their skills.

The first half was actually a game of two quarters with the crowd chanting ‘higher, higher’ for inflation and interest rates in the first quarter only to change their tune in the second quarter to ‘lower, lower’.  A fickle bunch as ever, spurred on by the media.  Upfront this gave momentum to our value boys in Q1 – the goal sitters, picking their position on the pitch with great care and then waiting for the ball to come to them!  The flashier growth players, distracted by the chanting crowd stood still in Q1, but Q2 saw their mojo return with darting runs to new highs.  In the end both sets of players delivered the goods.

Defensively the fixed income boys were up against the head winds in Q1, but let the crowd get behind them in Q2 to put on a solid display at the back.  Yet again these players have done us proud with solid returns well above inflation – go on my sons!

Its always hard to pick out individual players in a team sport and when asked, the ‘Manager’ showed his loyalty by telling me its not just about one match, is a longer-term game. Yes, yes but who has earned his salary I asked?

A shout out therefore to the +30% strikers, these players all made us more than 30% in the 12 months to 30th June 2021 against the benchmark global equity performance of 25%, as equities recovered quickly from the pandemic shock.  Not a period to be off with injury! 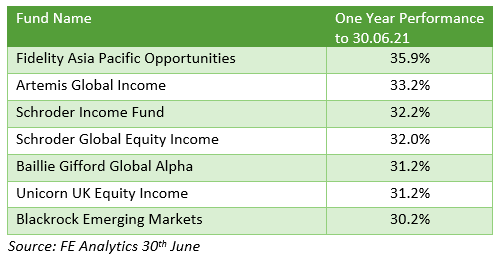 Of our other players only Lindsell Train failed to make at least 15% in the last 12 months and the Manager subbed him a few months back, the rest are kept in and will no doubt get their moment in the sun in time.

Defensively the whole squad have been excellent. With inflation at around 2% and the average Global Bond player losing -1% in the last 12 months their returns have been exceptional, with Royal London just nudging out the boy Sanlam in the high yield space.

Player of the first half though, comes from the midfield.

Schroder Global Cities investing in global property Real Estate Investment Trusts (REITS) making 9% in the last 3 months has out performed the MSCI world index in those three months and is up 16% in the year. The Manager has always had faith in the lad and he is coming good.

So on to the second half, the talent is all there, the Manager needs to keep an eye on them but let the players do the talking.

Do you have a DB pension? What could it be worth?

We use cookies on our website to give you the most relevant experience by remembering your preferences and repeat visits. By clicking “Accept”, you consent to the use of ALL the cookies.
Cookie settingsACCEPT
Manage consent

This website uses cookies to improve your experience while you navigate through the website. Out of these, the cookies that are categorized as necessary are stored on your browser as they are essential for the working of basic functionalities of the website. We also use third-party cookies that help us analyze and understand how you use this website. These cookies will be stored in your browser only with your consent. You also have the option to opt-out of these cookies. But opting out of some of these cookies may affect your browsing experience.
Necessary Always Enabled

Performance cookies are used to understand and analyze the key performance indexes of the website which helps in delivering a better user experience for the visitors.

Analytical cookies are used to understand how visitors interact with the website. These cookies help provide information on metrics the number of visitors, bounce rate, traffic source, etc.

Advertisement cookies are used to provide visitors with relevant ads and marketing campaigns. These cookies track visitors across websites and collect information to provide customized ads.

Other uncategorized cookies are those that are being analyzed and have not been classified into a category as yet.